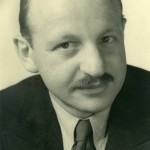 Months before the death of his father Friedrich Konrad Glatz already runs the trading house. In 1938 the Vienna Stock Exchange for Agriculture entrusts him with the function of arbitrator. Thus he must not go to war. The regime needs him to organize the grain industry. The trading house Glatz is part-nationalised.

In Serbia and Romania new companies are founded. In Belgrade, the trading house builds the Glatz Danube Cereal Ltd, and together with the German grain company of Flensburg Glatz runs the Cerealcomert S.A.R. in Braila, Romania. The branch offices organise the export of grain from there to the German Reich. But with the war’s end, all investments and subsidiaries in the Balkans are lost. 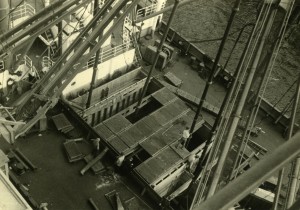 1945 Immediately after the end of the war, the company uses its so-called “Maria-Theresien-Berechtigungsschein” – a licence to trade in goods of all type – to do just that: everything from shoe polish to brooms, cakes, almond paste and liquid soap to needles is sold.

Austria is reeling from the effects of war. For the distribution of flour a distribution centre is established. Glatz is assigned to organise it, the implementation is done by a special cooperative of Viennese bakers. This requires a complex ration couponing system that has to be established and managed. At the same time the company is also responsible for other foods. 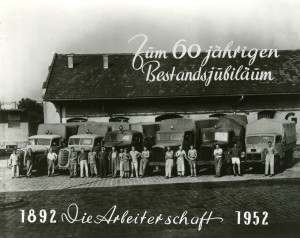 In 1947, Ernst Weiner, then only 28 years old, is granted full power of attorney, in recognition of his performance and loyalty. He had joined the company in 1933 as an apprentice taking the company’s future into his own hands immediately after the war and leading the company successfully through the first years of peace after the war. 1949 the head of the company consists of a trio, as also chief accountant Raymond Klotz is appointed attorney. He is an employee of the company already since 1915.

Following the expiry of relief supplies from the United States, the cereal business changes and Glatz begins to import grain itself. This is necessary as the domestic production is far from large enough to meet the demand, and the Austrian grain is inferior to the industrially produced varieties from overseas. 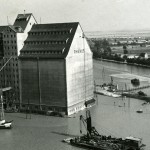 The export department at Glatz conducts the transactions with the international grain wholesalers, especially in the U.S. and Canada. Up to 900 000 tons a year were imported into Austria during this period after the war. 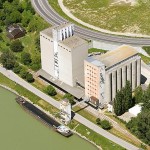 On September 1st 1950 Glatz registers the “Agrar-Speicher-Betriebs-Gesellschaft m.b.H.”. The new company has the purpose to operate the storage silos Rhenus and Hansa in the Danube port of Vienna-Albern which are under Soviet administration. In the silos Glatz stores the large quantities of cereals, which come from overseas.

In 1952 Paul Bruck from Leopoldsdorf becomes an important strategic partner for Konrad Glatz: The son of a country merchant’s family founds the Paul Bruck KG. This company builds 15 sites in the Marchfeld and the northern Burgenland. Over the years, Glatz increases his shares in the joint company, up to when Paul Bruck KG entirely passes over to the property of Glatz.

Coming from Vienna and Lower Austria, Glatz rolls out on the entire Austrian market. With newly hired staff in a new office location in Wels, Glatz starts business with mills and other buyers westwards as far as Tyrol. Also southern Austria is worked on systematically and successfully by Glatz representatives in Styria and Carinthia.

1960 and 1970 Glatz builds in Korneuburg, conveniently located directly on the Danube, two large silos with 40,000 tonnes of storage capacity.

In the mid-sixties a department for consumer goods such as dried fruit, rice and tinned goods is established, which in the 1980s would provide a quarter of the total turnover.